EXCLUSIVE: Canadian authorities are going all out to imprison a Christian street preacher who stood against the LGBT juggernaut, sparking urgent concerns about human-rights and anti-Christian persecution in America’s increasingly radicalized neighbor to the north.

“I think this is the most important questions Canada faces, and any nation faces. Who are we as Canadians, and what is the role of the government?”

It is the most important question any nation faces, and it is one that Bill Whatcott of Canada is determined to get answers to. It is also the driving question behind his activism. If you do not know his name, you should. He has been arrested over 30 times for asking this question in front of abortion clinics and on college campuses; but now he is the main subject of a test case by the Canadian fascist, “liberal” party and their war on Christianity. His criminal trial starts in June, and it should be one that everyone is looking at if you love freedom and religious liberty across North America.

Bill is facing 2 years in prison for another peaceful protest of regressive communist policies that attempt to silence Christians on social questions. This is an attempt to set precedent in Canada for all Christians, preachers, and protesters that will work their way down to America if the secular humanists have their way. This means, if they can do it to him, they know they can do it to you. The picture above shows Bill protesting the persecution of Christians in 2014, dressed harmlessly as “The High Priest of the Flying Spaghetti Monsters”, which is a common trope atheists use to insult Christians. In fact, this phrase is so important to atheists, he was sued by an American atheist group who had trademarked the name for their brand of Christian hatred. He has been doing these protests for 3 decades. 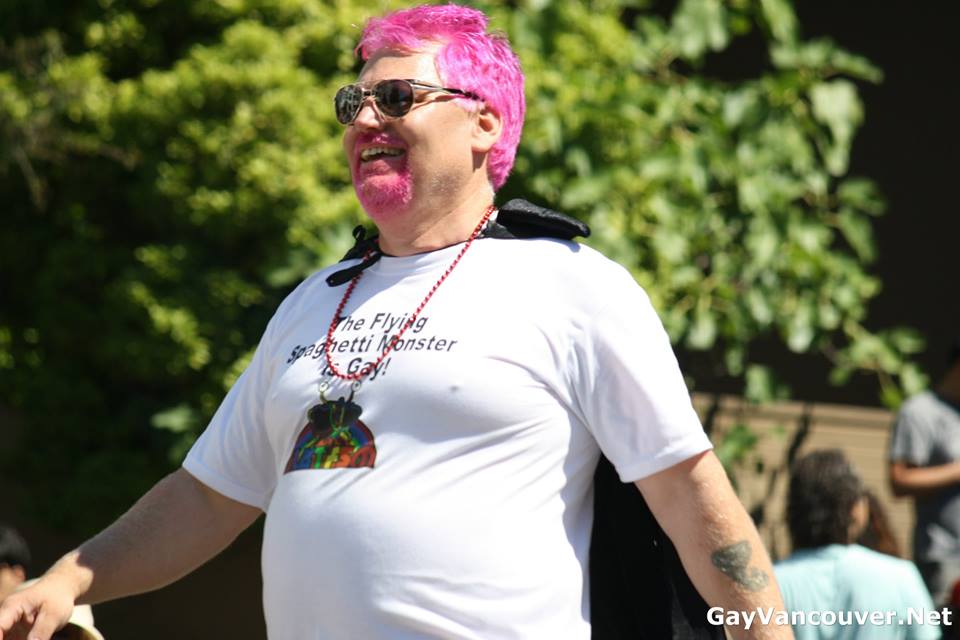 Bill’s state-run trial could land him with up to 2 years in prison for a similar 2016 non-violent protest in Toronto where he suited up again as a “Gay Zombie Cannabis Consumer” which is par for the course at the Pride Parade where men were naked with rainbow flags hanging from their genitals. Parents have been convinced that bringing their children to these events is the definition of “tolerance” through targeting education for years of incrementalism in the legal and school system of Canada. Disagreeing with this degeneracy now falls under Sec 319; “Willful Promotion of Hatred.”

His crime: Handing out Bible Scripture and CDC pamphlets on the homosexual and promiscuous lifestyle being detrimental to health of the population of Canada. The government, including Justin Trudeau, took part in a civil suit against Whatcott. They claimed he was in violation of Pride Parade rules because they were handed out under false pretenses and put everyone at risk. They were. He did trick people. They believed they were being handed condoms for orgies, and to their “horror”, they actually got the Word of God and health facts called “Bible condoms.” He spent 3 years, and a small fortune, fighting a $104 million dollar civil suit for his activism in this parade led by the former Canadian Deputy Premier, George Smitherman and the full backing of the Canadian government.

This civil suit was not enough. The Magistrate in Toronto and liberal government of Canada were not satisfied and wanted to silence anyone with the will to stand up to tyrants. No Christian, health professional, psychologist, or logical person is allowed to ask the question “Is this spectacle of pornographic imagery, forced transgenderism, and open pedophilia good for our country?” It seems important, and it also seems to be self-evident.

If Bill loses, you may be next. He is flamboyant, but he is not dumb. He held a medical license that was pulled for his protests of abortion clinics. He is well versed on Western medicine and psychology, and that is why his brand of Christianity is dangerous to the totalitarian ruling class who want population control, secular humanism, and a docile society that will not question their regressive policies. He is not just fighting with Holy Scripture. He is fighting with scientific fact and logical questions about Canada’s future.

There is a media blackout on this case in Canada, so the state-run media can say what they would like about him, but he cannot respond. We will stay current on this case, and any other government that looks to subvert their people through misinformation and centralized schools. Be vigilant in the face of tyrants.