TALLAHASEE — Education authorities in Florida must stop using government schools to sexualize, confuse, and indoctrinate children with radical homosexual and transgender propaganda, declared a powerful line up of speakers at the Parent Power 2020 conference by the Freedom Speaks Coalition.

Responding to the destruction of children’s innocence being pushed in public schools, a diverse coalition of thought leaders, lawmakers, pastors, activists, educators, and parents from across Florida and beyond converged on the Hotel Duval in Tallahassee in mid-November.

The event aimed to raise awareness about some of the radical content and sexualization that has invaded Florida’s education system. Organizers also highlighted the many educational choices that exist for Florida families, including homeschooling and private schools.

Another key goal, according to conference organizers, was to speak out in defense of Florida’s teachers. Across the Sunshine State and all over America, teachers are being forced to teach radical sexuality and gender confusion that violates their conscience and religious beliefs. This is unacceptable and wrong, organizers argued.

“Never in my lifetime did I ever think I would be fighting against such craziness as kids being told their genitals don’t determine whether they are a boy or girl,” explained Bev Kilmer, a former Florida lawmaker and the president of the Freedom Speaks Coalition behind the conference.

“PreK through 5th grade is the educational foundation building years for students,” continued Kilmer. “If you mess that up by confusing them about sex, which they are total incapable of comprehending, they will be lost before they get started. There are no do-overs for a child’s childhood.”

All people of good will must agree that exposing children to the pornographic material they see in schools today is wrong, she said. “If this was done outside of a school setting, these people would be arrested,” she said. “They should be arrested.”

Kilmer also spoke about her 13th great grandfather, John Rogers, who worked with William Tyndale and helped translate the Bible into English before being martyred by Bloody Mary. With that kind of heritage and ancestry, Kilmer said she knew she had to be involved in this fight.

One of the leading legislators resisting the extremism in school and beyond has been Representative Mike Hill, one of the key speakers at the conference. Representative Hill has become a leader in the fight for faith, family, and freedom in Florida, sponsoring bills on everything from criminalizing abortion to abolishing infringements on the right to keep and bear arms. At the event, he received the Thomas Paine Award.

Florida Citizens’ Alliance President Keith Flaugh, a leading voice on education issues in Florida, also spoke at the conference. Flaugh, who served on Governor Ron DeSantis’ transition team for education, has been working with Florida’s Education Commissioner to revise — and supposedly remove — the Common Core standards currently in use across the state. How that will turn out remains to be seen, he said.

Like others in attendance, Flaugh sounded the alarm about the grotesque pornography that has infiltrated Florida’s schools, saying it was unacceptable. But there are options, he said, encouraging parents to find out what choices might be available to them.

Flaugh did express concerns about tax funding being used to potentially control educational alternatives. But Florida Citizens’ Alliance, which has tens of thousands of grassroots supporters, “came to the conclusion that public education system is so broken that we have to start some place, and competition is a good place to start,” he said.

“We are in a fight for the future of our nation,” Flaugh added. “This is a David and Goliath fight. But I always ask, if not you, who? If not now, when?”

Perhaps the most dynamic speaker was Pastor Paul Blair, a former NFL football player and a nationally known advocate for moral values and liberty. In his first speech, Pastor Blair explained the key role of pastors and the Bible in ensuring good government, including the biblical basis for civil government, individual liberty, family, church, and more.

Blair also dove deep into American history, quoting Founding Fathers and other founding-era leaders. He also explained natural law, quoting from William Blackstone about the fact that natural law is just another term for “God’s will.”

Attendees also learned about the “Black Robe Regiment,” the patriotic and God-fearing pastors of colonial America who played such a crucial role in inspiring freedom fighters to take up arms against anti-biblical tyranny. The audience loved it.

Later in the evening, Pastor Blair, who recently recovered from throat cancer, gave a brief apologetics talk. In it, he highlighted some of the overwhelming evidence for God’s existence and for the resurrection of Jesus Christ.

Discussing the odds that one man could have fulfilled even just a handful of the hundreds of Old Testament prophecies about the Messiah, Blair concluded, citing the numbers and the experts who have looked at them, that it would be literally impossible.

In an interview after his first talk, Pastor Blair spoke about the Liberty Pastors Network he is cultivating. The group, which is training hundreds of pastors across Florida and beyond to have a biblical worldview, is working hard to educate American Christians. The Bible applies to all areas of life, including government, he said.

Retired military counter-intelligence official Randy McDaniels, who is active with a wide array of organizations, spoke to the summit about the demoralization of a nation. The first step, he said, is to erode a nation’s faith in God.

“There is a war going on, and this war is for the hearts and minds of our children,” McDaniels said, pointing to Europe as an example highlighting the dangers facing America. “There is a growing rape crisis, Sharia law is spreading, and children are being indoctrinated.”

McDaniels, who has been a leader with Act for America!, also warned about the dangers of fundamentalist Islam. “As we as Christians become more pious, we become kinder and better people,” he said. “As Muslims become more pious, the risk that they will perpetrate violence grows.”

International journalist and educator Alex Newman, the president of Liberty Sentinel Media, used his time to sound the alarm about what has happened to America’s public education system. Newman, who has traveled across America and the world urging parents to “Rescue Our Children” before it is too late, explained that the public school system is just doing what its architects wanted it to do: Turning children against God and liberty by the millions while dumbing them down.

“What is happening in the government schools today would shock even the most progressive parents,” said Newman, who has written books and articles for many publications about the disastrous U.S. education system. “The first step in dealing with this crisis is to understand what has happened.” Newman also urged attendees to get copies of The New American magazine’s Special Report “Rescuing Our Children.”

During the evening, a special event was held with Ann Bowden, including a video message from her husband, legendary FSU football Coach Bobby Bowden.

“You know folks, at this point in my life, I thought I was done building winning teams, but here I am, recruiting for one of the most important teams of all, Freedom Speaks Coalition, and I need you on this team with me,” Coach Bowden told attendees via video as his wife sat in the audience.

FSU paraphernalia signed by Coach Bowden and other valuables were auctioned to raise money for the coalition and its activities.

Outside the event, an angry mob of shrieking LGBT activists screamed through bull horns about alleged “bigotry” and “hate” as reporters buzzed around and cameras filmed.

However, when asked by the Liberty Sentinel for specific examples of bigotry or hate, just one protester offered an answer: Apparently a lesbian somewhere had been fired from her job. The activist, a man dressed in women’s clothes, did not know the name of the alleged victim, where the incident had taken place, or any details about the alleged perpetrators. Indeed, the protester did not even know how the alleged case of “discrimination” had anything whatsoever to do with the conference going on inside. But that did not seem to matter; He just went back to shouting. 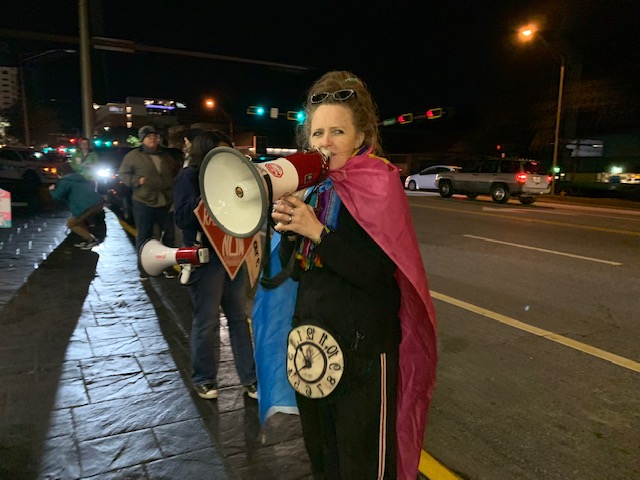 One of the leaders attending the conference, Charlene Cothran, was once the nation’s leading black lesbian activist, serving on numerous boards and even launching various LGBT groups and publishing an LGBT magazine targeting the black community.

However, Christ rescued her from that lifestyle and led her to found the Evidence Ministry. Her ministry provides proof that the sin of homosexual behavior can be overcome — just as Paul made clear when he declared that “such were some of you,” referring to leaving behind homosexuality and other sins.

In love, she tried to speak to the LGBT activists outside with that reality. “I am your proof that change is possible,” Cothran said. But they were not interested in listening, she told the Liberty Sentinel afterward.

Also outside was Lynn Meagher, a mother who lost two children to what she describes as the “trans cult.” After referring to one of the men dressed up as a woman as “sir,” the man fumed in a deep voice, “what did you call me?”

In her talk, Meagher spoke about her undercover filming of a drag queen event for children in Seattle. The videos, which went viral, showed a man in a dress barking, and another man in a dress taking off clothing. Police then forcibly removed Meagher from the event, she said.

As has become typical of the establishment press, the media at the Parent Power 2020 event, including the far-left Tallahassee Democrat newspaper and WCTV, mostly focused on the protesters. But the comments underneath confirmed that the increasingly irrelevant “mainstream media” are radically out of touch with mainstream America and their own audiences.

The Freedom Speaks Coalition brings together an impressive array of conservative, Christian, libertarian, and other groups under the banner of protecting children from sexualization by government schools. That way, the wheel does not need to be re-invented, Kilmer said.

Announcements about the future should be coming soon, she added.