GAINESVILLE – The United Nations wants to disarm Americans and centralize control of all firearms in the hands of the UN and its member governments, National Rifle Association (NRA) CEO and Executive Vice President Wayne LaPierre told The Liberty Sentinel.

“The U.N.’s philosophy is that governments should have guns and individuals shouldn’t,” he explained. “They don’t think in terms of rights or freedoms or liberty.”

Indeed, as The Liberty Sentinel reported recently, the UN played a key role in helping the Socialist regime in Venezuela disarm civilians.

Unsurprisingly, the disarmament campaign was followed by an explosion in violent crime and murder, turning Venezuela into the most dangerous and violent nation on earth.

The UN-backed gun-confiscation program also allowed the Chavez-Maduro regime to terrorize citizens with impunity, knowing that all of its law-abiding victims would be disarmed.

LaPierre’s comments were made as gun-rights activists and enthusiasts waited in long lines at Barnes and Noble to meet the prominent leader in the fight to defend the Second Amendment.

The NRA chief stopped in Gainesville on Oct. 26, 2007, to sign copies of his new book, The Global War on Your Guns: Inside the U.N. Plan to Destroy the Bill of Rights.

Since the book was released, LaPierre’s assertions have been confirmed, with the globalist organization–often dubbed a “dictators club” by critics–pushing the UN Arms Trade Treaty. Under the scheme, governments would be required to control all firearms and ammunition.

While the Obama administration supported the UN plan, the Trump administration has said it will never move as long as President Trump is in the White House. It would almost certainly be stopped in the U.S. Senate, too.

As LaPierra sat down having candid and at times lengthy conversations with members and fans, passer-bys may not have realized he was the leader of one of the most powerful non-profit organizations in the country.

Supporters expressed renewed hope for their cause with the release of LaPierre’s extensively researched book. The N.R.A., which has over 6 million members, is also seen as a source of hope in what supporters call a “battle for freedom.”

Some attendees expressed concern with the direction legislation has taken recently.

“Unfortunately critters like us are kind of endangered right now,” said Beatrice Straker after getting her book signed.

In an exclusive interview with The Liberty Sentinel, LaPierre discussed the themes of his book on the UN agenda. It centers on historical corruption in the United Nations, the anti-gun measures the organization has adopted, and the threat he believes they pose to the American way.

The UN is a massive bureaucratic assembly of governments and dictatorships that are completely out of touch with their own citizens, LaPierre continued.

And like its more totalitarian member regimes, the UN fully intends to have an America without guns. The ultimate goal, he said, is a world where privately owned firearms are banned worldwide, and only the UN and governments are allowed to possess weapons.

“Thousands of NGO’s [non-governmental organizations] surround the UN,” LaPierre continued. “They go around the world having rallies trying to have guns banned for them.”

Indeed, the UN has a giant anti-gun statue outside its headquarters.

LaPierre warned that the U.N. was moving fast and that their philosophy was starting to “infect us like a germ.”

When asked about the mass confiscation of firearms after Hurricane Katrina, LaPierre explained that he was outraged.

“It was the largest seizure of firearms on our soil since British General Gates seized them from Boston colonists in 1775,” he said. “These are the types of situations where the 2nd Amendment is most important.” 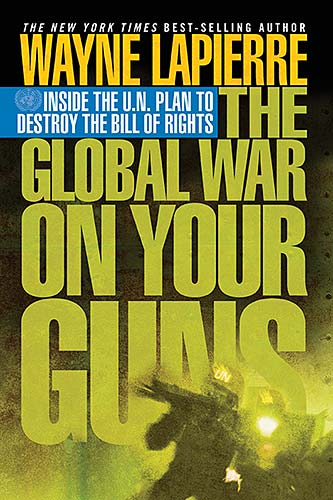 LaPierre elaborated on the NRA’s actions following the gun seizure explaining that they sued the state of Louisiana on behalf of thousands of plaintiffs: families and property owners who were left defenseless against looters.

“Fortunately we won, but unfortunately, they still haven’t returned all of the firearms,” he said. “We actually put the mayor of New Orleans in contempt of court recently.”

LaPierre also said that with the help of then-Louisiana Gov. Kathleen Blanco, they were able to have a bill passed forbidding the confiscation of firearms from law-abiding citizens during declared emergencies. Since then, several states and the federal government have adopted similar bills.

LaPierre sounded proud of the NRA’s accomplishments but stopped short of celebrating. He said the UN was making the fight more difficult.

Beyond firearms, LaPierre warned the Sentinel that UN also had set its sights on other fundamental freedoms.

Since that warning, the UN has moved full-speed ahead on seeking to clamp down on free speech and free expression. It even installed a Communist Chinese agent to run the UN International Telecommunications Union (ITU, the UN agency being groomed to regulate the Web.

When asked whether he believed this was being done maliciously, LaPierre responded: “I don’t think you can look at the UN and not be shocked with its corruption, whether it’s their sex scandals, the massacres, or their Oil for Food program; just look what they did to Cambodia, the Democratic Republic of Congo, Rwanda and the list goes on… these things are rampant.”

He also pointed out that the UN was full of “anti-American” tyrants, citing the fact that regimes such as those ruling Syria, China, Cuba, and others can sit on the Security Council and the Human Rights Commission.

A bill introduced for decades into Congress by Rep. Ron Paul (R-TX) known as the American Sovereignty Restoration Act would revoke United States membership in the U.N. and relocate its headquarters to another country. Its current version, H.R. 204, is sponsored by Congressman Thomas Massie and other liberty-minded lawmakers.

Watch Massie talk with Alex Newman about why America needs an “Amexit” from the UN:

LaPierre said he was not familiar with the bill, but that it sounded interesting and he would look into it.

As The Liberty Sentinel reported, the UN flag was flown over Gainesville’s city hall on Oct. 18.

When asked how he felt about its agenda permeating local government, LaPierre responded, “That’s why I wrote this book; our freedom and the Bill of Rights are what make our country the greatest in the world, and the last thing Americans want is to let the UN succeed in taking that away.”

“If the U.N. does succeed, it would be a sad day,” he told the Sentinel. “In a very real way, it would destroy the American way of life.”

An earlier version of this article, written by TLS correspondent Christopher Arias, was originally published in 2007.